These new 2011 weapons from Blackwater will be totally manufactured in house and loaded with some of the best features available.

Blackwater states ” Our goal is to provide a superior handgun than whats currently available, at a competitive price!”

2011s will be available soon from www.blackwaterammo.com

Sorry for the static

While working a class a number of years ago we had a bonded couple. The female was a first time shooter and her other half, the more “knowledgeable” shooter, put the love of his life in a Smith & Wesson 2inch J-Frame. The first day went ok (or so we thought) but the second day not so much.  As we worked the shooting line we noticed her gun hand had a bandage on it and after further investigation we was discovered that a rather large blister had developed on her hand.

After some discussion is was decided that she should give a Browning Hi-Power a try as it would be a more comfortable firearm for her to continue the class. One of the instructors let her borrow her Hi-power and proceeded to instruct her on the workings of that fine gun.

The rest of the class that day continued without incident.  The next day low and behold she showed up at the class with her very own brand new Browning Hi-Power. She completed the rest of the week with great success and a lot less pain. And in the end she was awarded High Lady shooter in the class and third overall. Although the 2 inch revolver is a great little concealed gun for many in this case it was NOT the right gun for a first time shooter to take a week long course.

Many years ago, when first running our gun store, there was a customer who came in carrying a 1911 type firearm in a fanny pack. Even then fanny packs were falling out of favor and were very obviously housing a firearm. We used to jokingly refer to them as “shoot me first packs”. So while discussing the pro and cons of how to carry it came out that he carried with the chamber empty. My reply was “what the hell are you talking about?” because after all the training I’d been through I couldn’t believe that folks still did that. He proceeded to tell me he was pretty quick getting the gun out of the pack and chambering a round and he believed it was another level of carrying safely. But I still couldn’t hide my disbelief and amazement that he would carry in that manner.

I’ve trained all over the country and I can deploy and shoot very quickly from a holster. So I figured I’d give this a little test and produced some dummy rounds for his gun and mine. After making sure all guns were not LIVE and double and triple checking I had him draw and chamber a round and fire. The results varied between 2.5 to 3.5 seconds. Then it was my turn and to draw from a holster using a revolver, all 6 rounds were “fired’ in the same amount of time as it took him to get off one round. It was his turn to be surprised because he honestly believed he was very quick. 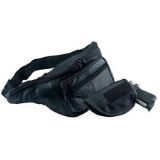 I said to him “you’re dead” at least once before you even have a round in the chamber. If anything bad goes down you’re already at a disadvantage because you are the reactor. Why in the world would you want to give the THUG the final edge?…

After all we are talking about your life here. With more in store “training” and some range training he finally came around and now carries cocked & locked and NOT in a fanny pack.